In a strange turn of events of last year, Dabur India’s coconut hair oil brand, Anmol Gold, was seen in a dispute with its competitor Marico’s Parachute.

At a time when people were dealing with Covid-19 and the implications that came along with it, Dabur took it as a time of opportunity to boast about their features that placed them at the top. Through a print ad released on the front page of The Times Of India newspaper, Dabur positioned itself as a cheaper product than its rival, specifically Parachute Oil. The print ad read, “Using a better value proposition as its central message, the ad simply said ‘Dabur Anmol Gold Coconut now at much better value than Parachute Coconut Oil’ followed by a comparison between the two - Dabur Anmol Gold priced at Rs 30 for 100 ml, as against Rs 39 for Parachute Oil of the same volume.”

However, the rivalry didn’t end there. The print ad continued to the next page where Dabur re-emphasized on the monetary value for which they sell their products alongside the authenticity that their brand conveys implying that they were the only brand to dissuade the use of artificial ingredients in their products. This re-emphasis was carried with a bottle printed next to Dabur’s which has an uncanny resemblance to that of Marico’s oil products.

However, this situation could have been avoided had Marico not done the same. The year before Dabur attacked Marico with comparative advertising in its print ads, Marico published print ad campaigns that led Dabur to take Marico to court.

ASCI noted that “Brands have been doing comparative advertising for a very long time across sectors especially in the FMCG category. While making comparative claims, the important point to consider is whether the advertisement is making a fair comparison. ASCI code does not permit denigration.”

Neither brand has made a comment on the issue hence. 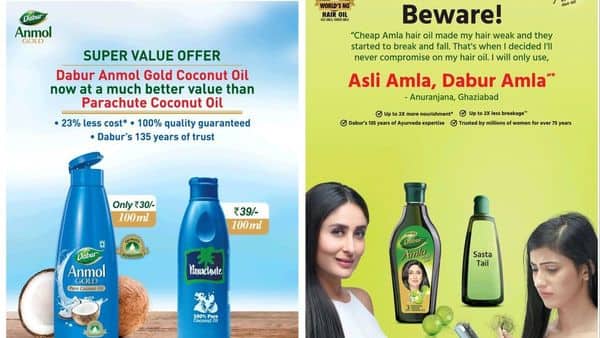