It is no secret that members of the LGBTQIA+ community have had their fair share of mistreatment in society, not barring traditional media and Pinterest may be on its way to break that.

With their new campaign, 'Show Your True Colors,' Pinterest aims at celebrating the diversity within the queer community, their inspiration, and also the new features Pinterest has added to their application to help the community feel more at home.

The campaign showcases 6 LGBTQIA+ icons who narrate their own life stories, what it means for them to be a part of the community, the way they've explored themselves, and the identities they choose to keep.

Few of the icons talk about how Pinterest helped in their exploration and how the brand serves as a source of inspiration for many members of the community to find inspiration for “coming out” and finally being themselves.

Pinterest announced that it's added a new pronouns option on both personal and business accounts to ensure there is no form of misgendering and instead helps members express their identity. 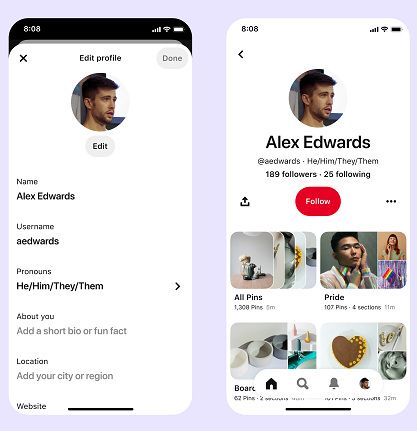 According to Pinterest, "Every year, people increasingly come to Pinterest to show their Pride and LGBTQ+ flags are a recognizable way to celebrate and show the world who they are. Searches on “bisexual pride flag” (up 5x), “genderfluid flag” (up 4.5x), “lesbian flag” (up 4x) or “asexual flag” (up 3x)1 continue to grow in popularity year over year."

Pinterest noted that searches for “coming out cake” grew by 2.5 times, “coming out party” by 67%, and “coming out photoshoot” grew by 44%, showing that Pinners are searching for creative ways to make this moment personal and unique while also underlining how the app is helping LGBTQIA+ members feel more validated and become a safe-space for their exploration of identities.

Additionally, Pinterest will also host a global virtual event on 23rd June to drive inspiration and conversation around being an LBGTQIA+ creator and business by inviting actress, model, and activist Dominique Jackson and American fashion designer Christian Siriano. The app is also donating to several non-profit organizations such as BLAQ, an organization committed to empowering the Aboriginal and Torres Strait Islander LGBTQ+ community through innovation, inclusion, understanding and advocacy; Immigration Equality, a leading LGBTQ+ immigration rights organization; and Mermaids, a U.K. nonprofit that helps gender-diverse kids, young people, and their families.